The new Brownstoner article about our continuing saga with home renovations is up! You can read it here and see all the pretty pictures: http://www.brownstoner.com/blog/2014/09/bushwick-reno-from-weeds-to-a-mural/

Extended version, with all my panic attacks detailed extensively, is below:

Oh, our backyard. Having a backyard was pretty much at the top of our list when we were house hunting, partly because outdoor space in NYC seemed just as luxurious as our own washer and dryer, but mostly, for our dog.

Unfortunately, our contractor did not include it in the budget to fix it up at all. So it’s kind of been chillin’ there for a year, a patch of dirt where weeds constantly grow and must be picked, a shed that is pretty much unusable (but because it’s made of brick and concrete, expensive as all get out to actually remove), and cracked concrete everywhere. Oh, and a storm drain that doesn’t always drain, it turns out (yaaaay, being a homeowner is awesommmmme).

We were going to wait until next summer to really focus on this project, or at least after the solar panels, but between the intense summer rainstorms, our lack of a green thumb, and a bit of laziness, our backyard has been taken over by weeds! And by taken over, I mean to the point where no amount of weed killer can stop them.

So we took to homeadvisor.com to try to find someone to pull up some weeds and prevent them from coming back up.

Turns out, no one just wants to pull up weeds. Everyone wants to put in grass, or astroturf, or a garden of some kind. Also turns out, no one has lawns in Brooklyn, so landscaping companies are a bit of a rare breed in general out here. We called maybe 5 people and one person called us back.

He was a lawncare guy and LOVED talking about lawncare. I think he loved it so much, he actually talked us out of wanting a lawn. He went over all the different maintenance services you would need to have, from sodding, to re-seeding, to weeding, to bug prevention, to prepping it for winter months. It was going to cost nearly $500/year to maintain a patch of grass. In Brooklyn. That might just be too luxurious.

The lawncare guy was so busy that he started to tell us to take our time deciding what we wanted, and then said, Actually, you can’t take your time. Let me know ASAP so I can fit you in.

Yikes. This is what happens when you’re the only guy who can take care of lawns in the outerboroughs.

It did snap us out of the small job we thought it was going to be, and into a crap-we-need-to-actually-do-something-out-here mode.

I was kind of losing it, I’m not going to lie. If not a lawn, then what?? We can’t just do concrete or bricks or stones because the dog needs somewhere to go to the bathroom. Maybe we should just put in a lawn. I love grass. And we are losing our window with the only guy who called us back.

And then Brian reminded me to breathe.

Can we agree we don’t want a lawn?

Uuuugh, can’t we just take out all the dirt and fill it with gravel or something? I said, exasperated.

Oh, wait. That’s actually a good idea. How about a rock garden?

Yes! A rock garden! No plants or vegetation!

We googled rock garden and it was even more overwhelming than lawn work.

Back to homeadvisor.com we went, this time to look for some rock experts. We got a few more hits and I emailed the ones who had reviews.

Well, just google a few things you like, send me some pictures, and I’ll come do the labor for you.

We tried that, and we don’t really have a good idea of what we want to do.

Well, do you like big rocks? Small rocks? Pebbles? Your best bet might also be to go to a local nursery, see what they have, a pick from there.

But we need help designing it too.

Just google a few pictures and send me what you’re thinking.

I hung up and started googling again. And it got even more overwhelming. We just wanted to get rid of the weeds and make sure they didn’t come back! Now somehow we are designing a rock garden and the only person who will call us back has no idea where to even start.

A few days later, I got a call from someone who I hadn’t emailed.

Excuse me, who are you again?

Oh, my colleague sent me your information, said you needed some landscaping help.

Which one was it? What is the name of his company?

I clicked onto homeadvisor.com. Score Construction or SPC?

Uhh… here I have his number.

Okay, got it. Sorry, just needed to figure out where you came from.

No worries, so what do you want done?

Well, we were hoping to get your advice on what we should do.

Well, just google a few things you like, send me some pictures, and I’ll come do the labor for you.

We tried that, and we don’t really have a good idea of what we want to do.

Well, do you like big rocks? Small rocks? Pebbles? Your best bet might also be to go to a local nursery, see what they have, a pick from there.

But we need help designing it too.

Just google a few pictures and send me what you’re thinking.

I hung up and started googling again. And it got even more overwhelming. We just wanted to get rid of the weeds and make sure they didn’t come back! Now somehow we are designing a rock garden and the only person who will call us back is once removed from the person we originally emailed and uses google as his supercalifragilisticexpialidocious (something to say when you don’t know what to say).

We continued to google.

The guy called us back again in a few days. So I can come by tomorrow, he says.

Okay, great, to take a look at the place?

No, I can get started. We can probably finish the job in one day.

Uuumm, okay, well, I guess we can go to Home Depot tonight and see what we like there. But doesn’t it take a week to deliver anything?

Oh, I can go pick up what you want tomorrow. I’ll start early with pulling up the weeds and then we can go from there.

Brian and I find ourselves in the Home Depot in Chelsea at 6 pm that night, staring at small bags because of course they don’t sell big bags of rocks in a city full of apartments. I took pictures of the rocks just because they were the first ones we’d seen not on google.

We end up buying a hose.

I guess you can go with this guy to the Home Depot in Brooklyn and pick something out, I say, defeated.

Is this really our only option?

He’s the only one who’s called us back! He’s ready to go!

But he has no ideas for us. He hasn’t even seen the yard.

So what do I do? He wants to come at 7:30 am tomorrow, I have to text him now or it will be too late. My voice is rising. We are paying for the hose.

Let’s talk about this when we’re outside, okay?

I close my mouth because otherwise, the next thing that’s going to come out of it, I don’t know if I want to take responsibility for.

Once outside, I apologize. I just want these monster snarkado weeds out of the yard!

Yeah, but it’s our money that we have to give and it’s going to be our backyard for a while, so let’s take our time with this. I’ll pull those weeds out myself if I have to.

Can we just call the guy who did our steps??

Oh yeah, he was great! I’d rather go with a guy we already like and trust than someone who will just come by because he can.

The steps guy–his name is Tee–comes by a few days later and takes a good walk around our small backyard. He gives us suggestions after we tell him no plants or greenery and we settle on keeping our concrete shed because getting rid of it will be more expensive and not give us much more room (he will fix the roof and powerwash it), pave part of the yard with concrete so we can put a seating area, fill another part of the yard with pea gravel and some weed paper (you know, to stop the weeds from growing, haha), and fix up the cracked concrete in the back.

Brian whispers to me, We should have done this from jump.

I nod and smile. Once we realized we didn’t want a lawn, we should have just called this guy immediately.

We go back inside and ask him how long it will take and how much it will cost.

He says it will take about 3-4 days total. He also says he will go back and figure out what it will cost and give us a fair price. He says he respects that we called him again after so long (we did the steps over a year ago) and knows we don’t have a very big budget so he doesn’t need to gouge us.

My favorite thing he said – I believe in making honest money, none of that zigzag money – you know, people who make a lot of money at once by cheating other people, they get the money right away, but it will never keep them satisfied. Money from working hard, that’s the kind of money I make.

Word. Basically, we should call this guy to do everything. (If we had only known two years ago that he did gut renovations!)

The backyard is done in 3 days and it’s night and day: 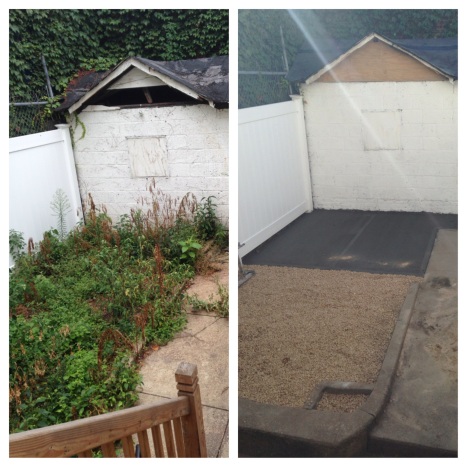 He even painted the walls white since he couldn’t powerwash the dirt off! Amazing!

Just in time for a big party we were hosting where we had an amazing artist and friend paint the first of many murals we hope to have covering our walls.

One thought on “New Brownstoner Article Up! Extended version below!”

This is what my face will look like when we finish the house!

Want to Buy a House?